The History of Boudoir Photography

A Brief History of Boudoir

So firstly what is Boudoir Photography?

Boudoir hasn't always been popular (or accepted)... Boudoir Photography began in France around 1890. It was highly taboo, illegal and classified as pornography! The first postcard featuring a naked woman was released in France in 1900, but had to be sold under the counter in shops throughout Paris. They immediately became hugely sought after collectors items. Around this time, Pin Up modelling also had its origins in Burlesque - Performers used naked cards to advertise their shows and then left them back stage at venues. 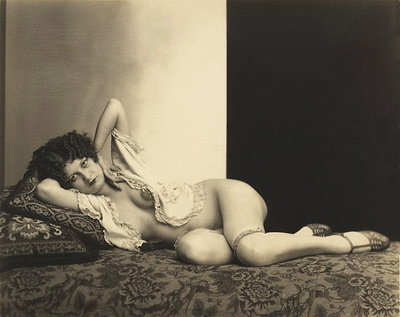 By the 1920s, boudoir photography really began to come into its own. During this time it was still illegal for images to contain nudity, but regardless, trailblazers such as French photographer Albert Arthur Allen continued to create images. He focused mostly on fuller figured women, as he believed these were the sexiest bodies. (His prints sell for £1000s today). If a photographer was caught taking or selling images containing nudity however, they were still heavily fined and even in some cases, arrested.

The Rise of the Pin Up

Fast-forward to the 1940s, and suddenly the focus was on Pin Up Girls. Partial nudity became more readily accepted 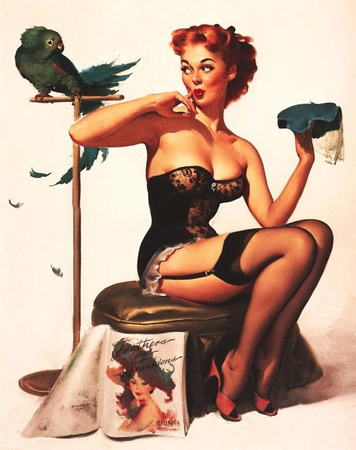 in part as a backlash to the serious nature of war. These women were beautifully curvy... the hourglass figure was highly desirable and they wore lingerie, stockings and corsets. PinUp girls were used to keep morale up for men during wartime. Elvgren was hugely popular, as were the Vargas Girls, painted as nose art onto planes which were seen as a symbol of good luck. By the 1950s, people realised that sex sells and soon the pin up girls became part of popular culture and were widely used in advertising, although still aimed more at the male viewer. Playboy Magazine was founded in 1953 and had a huge cultural impact, and slowly people began to change their mind on what was previously thought of as pornographic.

The next large change in the evolution of boudoir photography took place in the 1970s, when photography itself became better accepted as an art form. Many magazines began to feature photographs of real women as opposed to drawings, and so boudoir photography became better accepted. The fun and girly PinUp look became less popular as feminism grew and icons such as Brigitte Bardot and Sophia Loren became the strong, provocative sex symbols of their time. Women began to see sexual liberation as a form of rebellion against the patriarchy and therefore nudity became more widely accepted by both sexes.

Over the course of the century, the popularity of Boudoir Photography has grown and grown to the point where virtually every woman I know has had a boudoir shoot at some point in their lives. It has become a symbol of women's sexual freedom, of body acceptance at every level and of empowerment.

Boudoir is something I believe every woman should do at least once in their lives. Whilst the thought of it to some seems daunting, let me reassure you that it will be one of the most empowering and liberating experiences of your life! Most women are reassured that as a female boudoir photographer I understand women, how they see themselves and their bodies and most importantly how they want to be photographed. My work is a long way from the world of ‘glamour’. My hallmark is elegance and sophistication. My work attracts strong, independent women who are keen to have a photoshoot at a significant time in their life. And whilst boudoir photography was historically something that a woman did for her partner, to be kept private, pretty much all of my clients are doing it for themselves, to celebrate their bodies and let me tell you, the vast majority want the world to see how fabulous they look! Take a look.

What are you waiting for? Book a shoot here.

If it's both terrifying and amazing, then you should definitely pursue it